Home Design Cordoba House : An architectural wonder in the lap of nature
DesignLatest

Cordoba House : An architectural wonder in the lap of nature 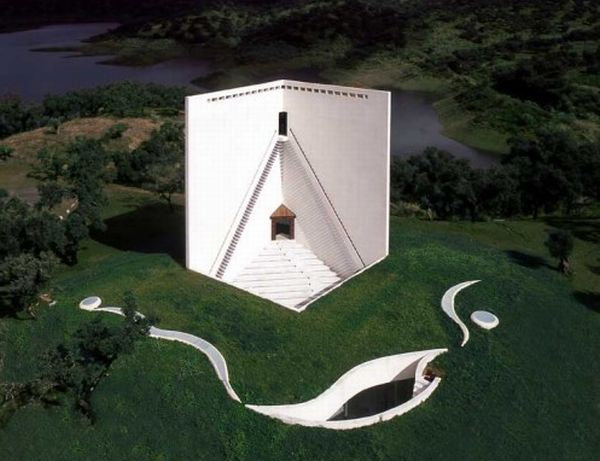 Based in Cordoba, Spain, what could be better designed than this beauty Cordoba House in the comfortable lap of mother nature! Designed by Emilio Ambasz, this wonderful house has been created in the Arabic-Andalusian architectural style and situated on a promontory that juts out into a beautiful lake. It has been developed at the far end of the road where it becomes a part of a big bunch of olive trees. Built using a special local technique, Cordoba House was initially developed in an open space using bricks and concrete, and then was mounded by the insulating cast sand. Under Southern Spain’s dry and hot climatic conditions, Cordoba House is a soothing, restful place where a unique blend of concrete floor, insulated double walls, slender columns, buried surfaces and fiberglass lining is presented in a stylish artistic manner. The structure of this house starts receiving its special architectural definition from the opening patio and entrance itself. Its entrance is created by a right-angled merger of two enveloping stuccoed walls. Through the running auditorium-style wide steps, the entrance leads down to an open-air patio. The top merging edge’s external wall has a North side orientation to offer shelter from winds and shade to the balcony, as well as provides a creative reflected pattern to the sunlight entering the house. The formal square-shaped patio accommodates an ambulatory in its shaded orientation, which further acts as a gateway between the house and patio. One can flexibly move in and out of the house through the stacks of glass walls between the patio and living spaces. A large space, running continuously in the interiors of the house and divided into several sections, is surrounded by sinuous walls on one side and has perimeter walls that look really flashy when the skylights brighten them up.

Adjacent to the living room, there are containers serving as kitchen, storage areas or bath. To rest, visitors may utilize comfortable living spaces or alcoves with surrounding sidewalls. Cordoba House also has another curvilinear patio for outside access and better ventilation. Another amazing Andalusian architectural feature is the 3,000-piece balcony designed for this house. While providing a spectacular view of the surrounding landscape and the lake, this balcony also gives an amazing observation tower-like feel. There are ascending and descending cantilevered metal staircases on both sides of the balcony. From the bottom of these stairs, water gets generated that is taken up the high walls through excavated handrails and gets collected at the semicircular fountain in the center. As you go up the balcony, you may observe that an intense sound produced by the water at the bottom keeps getting quieter, thus having its own charm at every step. Also, the earth-covered roof of Cordoba House passes on a cool breeze to visitors even if it’s hot outside, thus making their experience heavenly.

Most unusual structures around the world

Table made from dried French bread is...