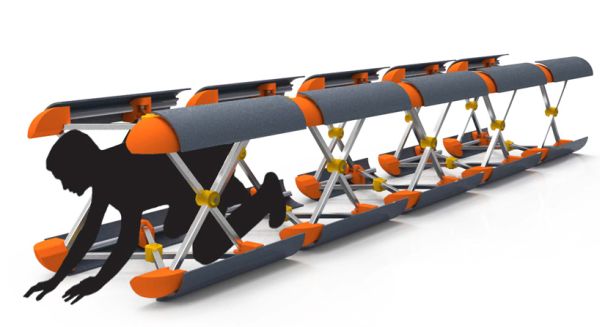 This is a clever design which will come handy when disaster strikes. It is specifically meant to rescue people caught inside rubble of a structure, pile of debris or any other type of wreckage. Instead of digging the ruins piece by piece, this gadget goes for a quick and easy solution to rescue victims struck by a disaster. Dubbed as the “ruins catheter,” rescue with this apparatus will be a lot less time consuming and many lives will be saved with lesser effort. The design of this machine is taken from the structure of a balloon catheter, which is an equipment used in medicine to expand arteries. It applies the simple principle of a balloon increasing in volume once air is blown into it. The machine just needs to be placed at the borderline of the rubble. It can then be opened to form a full fledged tunnel. To expand the volume and turn it into a tunnel, one needs to pump air inside. It will then billow just like an inflated airbag or a balloon. The swollen channel can then be used like a tunnel through which people can crawl outside. While rescuing operations are going on, not just one but a number of such tunnels can be introduced. This innovative concept has been conceived by Idan Raizberg from Belzalel Academy of Arts and Design in Jerusalem.

The apparatus was showcased at an exhibition put up by the academy. The exhibition was organized by graduate as well as undergraduate students at the Ventura Lambrate and was held during Milan Design Week 2012. The prime theme of this demonstration was “Design Bonanza,” which tries to prod creativity of students by encouraging experimental and pioneering designs. The prime focus was to make students think out of the box and help them dabble with new materials, shapes and breakthrough ideas.

Shreepati Gardens: A one of a kind residential tower planned for India