Top Posts
Is It Worth to Soundproof Your Automobile?
Your Definitive Guide to Holiday Makeup
How To Spruce Up Your Bedroom With an...
All you need to know about Savile row...
What you need to ask commercial painting companies
How to Create the Best Photobooks
A Short Guide To Avoiding Unemployment Depression
Make a style statement with traditional British Country...
How to add subtitles to a video using...
Lopifit- the wonder walking bike for adults
Home DIY Idle Chinese factory worker commercializes DIY Mini Submarine
DIYLatest 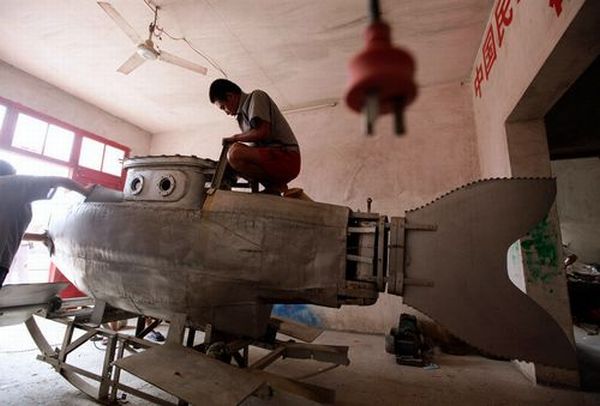 A worker from the most populous city in Central China uncovered substantial market for underwater vessels and decided to open his own submarine building factory. He started this factory with around $400 thousand start-up and has got ten employees. Building each DIY submarine costs around $31,621 and has everything needed to make it survive underwater ranging from emergency oxygen reserves to underwater monitoring video camera.

The mini submarine can accommodate two people easily taking them as deep as 30 meters at the speed of 20 km/hr for about 10 hours. This makes it really useful for cleaning riverbeds for garbage and for fishing. In the beginning few of his prototypes even sank but now he has mastered the art and has already received three orders for the year.

The very first customer of the mini submarine, a sea cucumber fisherman claims that though the submarine was not as flexible as car for obvious reasons but it was fully functional and worked pretty well. The submarine genius is presently working on this second submarine that will have wrought iron walls and air-tight windows.

The DIY mastermind says that building submarine has become more than fun and interest for him as he can see golden business opportunity in this profession. He is working hard to raise funds as for now only one submarine could be completed in a month. Once on track, this DIY submarine building can prove a real boon for China’s domestic market.

Footbridge to purify water for Amsterdamanians

Most amazing cycling shoes ever designed

Cordoba House : An architectural wonder in...