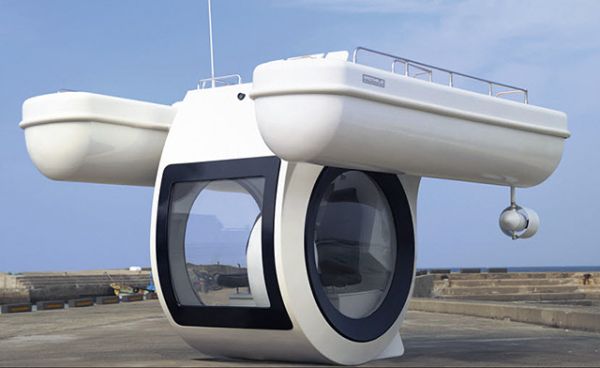 From being an important weapon in the warfare to delivering weapons, submarines are very important in providing security to many nations of the world. They are one of the important naval vessels also that can also intercept signals of critical importance. Over the years, the design of submarine has undergone several changes. This article lets you know about the five coolest submarines ever. The Hyper-Sub is an extremely brilliant design of submarine, which is actually a $3.5 million submersible powerboat. This submarine is designed by Marion HSPD and is ready for its manufacturing. The heavy-duty machine has a 31-ft surface-cruiser with an enclosed cabin. It is powered by 440 hp inboard diesels and has a maximum speed of 40 knots. The mechanical giant also offers an umbilical SCUBA support. This a personal yellow colored submarine that has a small accommodation of only two people in upright position. It can take you almost 1,000 feet under water with six hours life support. It is loaded with 120 volt and 24-volt battery plank, two 3hp thrusters, two 3hp vertical thrusters, external halogen lamps, VHF radio, GPRS and a climate-controlled sphere. The submarine costs up to $2 million. This is a unique design in that the upper part of the submarine remains above the water surface making it easier and safer mode of travelling. Hence, technically this may not be a typical underwater submarine. You can have an amazing view of the marine life with four hours of cruising time provided by the submarine. RAONHAJE is the company that manufactures this submarine. This is the latest creative invention of marine engineer, Graham Hawkes and its looks resemble a plane. The submarine is loaded with single rear mounted propeller that looks like an electric fan, lithium phosphate battery, Plexiglas canopies and a thick pressure hull. The Nautilus VAS is a personal submarine that is designed exclusively for private yachts. The submarine’s special military grade construction makes it completely safe from any kind of attacks. To add more joy to the diving experience the submarine ha an inbuilt stereo and a mini bar too.

From offering SCUBA support to providing protection, along with a mini bar, all these underwater monsters will make you go completely crazy.

What Could a REAL Spaceship Actually Look...

Floating Homes that will amaze you with...

Imaginative Studio Apartments We Did Not Know...