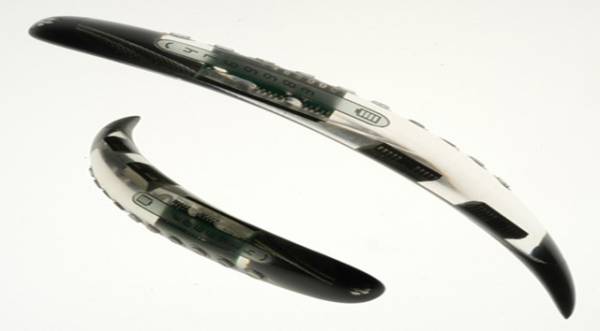 A cordless phone is a kind of portable telephone that replaces coiled wire of the traditional landline phone with wireless radio technology. While the contemporary mobile phone can be carried anywhere, the cordless phone can only cover a distance as far as the handset can communicate with its base unit, which is usually a few hundred feet. But the meek cordless phone is seeking to adapt to the huge demands of the rapidly progressing communication scenario with the latest Personal Handy-phone System (PHS) and Digital Enhanced Cordless Telecommunications (DECT) technology. PHS and DECT empowered cordless phones offer advanced features such as data transfer and limited international roaming, making the cordless phone a highly valuable option in any household. Cost, ease of use, range of transmission and duration of standby time are essential factors to be considered before buying a cordless phone. Hang up your old cumbersome cordless phone and pick up one of these terrific models below.

Designer Michael Paterson has created a unique phone concept that has the potential to revive the charm of cordless phones. The end result is a futuristic design while retaining all the core functions of a cordless phone. Transparent on the outside, this creative phone resembles a beautiful piece of jewelry reminding the user of its link to all the virtual information available in the world. This cordless phone is handcrafted out of a silicone mold and covered with cibatool to give a smooth finish. This amazing cordless phone has no specific display or keypad, the 0-9 touch keys are simply placed along the length of the phone. The designer has loaded the phone with state-of-the-art features such as voice commands to activate various functions and ability to scan and share either printed or handwritten text messages. The Orefon cordless phone has been designed by Oregon Scientific in partnership with Kit Men. This artistic phone is slim in its design and smart in its uses. It comes with an unmatched smart interface and is available in two color combinations, you can choose from either classy black and white stripes or solid orange color. All the icons on this phone are gently embedded onto the keypad, giving it an elegant look. This digital phone can be easily attached to another handset without an additional phone jack, thereby enabling its users to use it conveniently with multiple handsets. D-Link has created an eco friendly cordless phone named the FuChat phone that can detect human emotions. FuChat cordless phone is made entirely of biodegradable plastic using renewable resources such as cornstarch and sugarcane. This cordless phone helps its users to understand their emotions better through hi-tech sensors that can detect fluctuations in the user’s voice and body temperature. This phone will modify its display, lights, sound and color when it senses a change in the user’s tone or body temperature to alert the users of their current emotional state. This can be a huge bonus for both business calls and personal calls. On the back of the FuChat cordless phone, the user’s emotional data, time, weather and other information are displayed. The FuChat phone can even hang from a door handle through the hole on top of the phone or stand upright on any flat surface while displaying messages such as ‘do not disturb’. Designer Terry Lo has developed the futuristic Zhu Skype cordless phone that can be connected to either your PC or laptop to make calls using Skype. This digital cordless phone displays a convenient C-shape design, a bold LCD display, ergonomic keypad, large phonebook and a base unit with an in-built SIM card slot and offers USB 2.0 for seamless system connectivity. Users can simply twist the phone by 180 degrees to either answer or end a call. The Zhu Skype cordless phone comes with an interesting night mode, where the LED lights on the base unit will glow softly so users can easily locate the phone even while it is dark. The Detraform Model 500 cordless phone has been developed by Kiwi&Pom based on advanced DECT technology. This innovative cordless phone features an unusual L-shaped design and is primarily made up of sustainable materials such as polished polycarbonate and anodized aluminum using state-of-the-art Canadian engineering techniques. This phone sports a subtle user interface, a high quality speaker phone audio, easy push-to-talk intercom system and is available in a variety of classic colors. Here comes a stunning cordless phone named as Symbio, proudly developed by Thomson based on advanced DECT and VoiP technology. Apart from making crystal-clear calls, the Symbio cordless phone is capable of playing live music by tuning into any of the thousands of radio stations available on the Internet, picking up real-time RSS feeds, and automatic synchronization of contacts. This cordless phone comes with in-built rechargeable batteries that can withstand up to 6 hours of rigorous usage. Kelvin Kung has designed this ingenious Catapult cordless phone primarily for anger management. This unique cordless phone has an integrated gyroscope that senses sudden motions and automatically either disconnects or mutes the ongoing conversation. Say for example, you are in the middle of a very angry conversation with a friend, and you feel like throwing your phone, then the Catapult phone will automatically mute the incoming call. Even if you do end up throwing the phone, no harm will happen as it is made up of sturdy shock-absorbing silicone. Several studies prove that emotions such as anger need to be vented out regularly, or the person may eventually suffer from psychological trauma. Having a phone such as the Catapult will let users release their anger in a civilized and constructive manner.

The BeoCom 2 cordless phone has been developed by Bang & Olufsen with advanced technology. This striking cordless phone is crafted from a single piece of sturdy anodized aluminum using the hydro-foaming method, so it forms a natural soft shape that can sit snugly in the user’s palm and ca
n be frequently used effortlessly. The charger can be fixed either on the wall, on a table or just about anywhere in the home. The BeoCom 2 cordless phone system can incorporate up to eight separate handsets from a single phone jack. One of the noteworthy features on this phone is that its electronic phonebook that is commonly shared across the eight handsets is automatically updated each time a call is made or received, so organizing the phonebook becomes a highly easy task. The BeoCom 2 cordless phone guarantees high quality conversations and is available in many attractive colors. Oricom has come up with its latest cordless phone named as Gilda, designed by Milan-based design consultancy MID, inspired from the phones in the 60s. The Gilda designer cordless phone is based on advanced DECT technology and offers exciting features such as an in-built answering system using flash memory, a large phonebook, ten exclusive ringtones and it can last a good ten hours on full charge. This gorgeous cordless phone is available in various attractive colors such as red, black, white, green, yellow and orange.