Top Posts
Read These 7 Boring Books To Beat Insomnia...
7 Must read mangas for a mature audience
Is It Worth to Soundproof Your Automobile?
Your Definitive Guide to Holiday Makeup
How To Spruce Up Your Bedroom With an...
All you need to know about Savile row...
What you need to ask commercial painting companies
How to Create the Best Photobooks
A Short Guide To Avoiding Unemployment Depression
Make a style statement with traditional British Country...
Home Latest City in the Sky to offers earth’s inhabitants an escape from their murky surroundings
LatestOffbeat 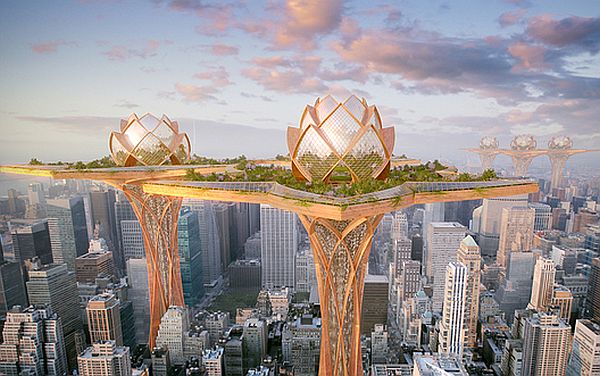 It may look like scene right out a sci-fi flick where humans have begun to establish settlements on other planets in the universe and that too far in the future where traditional architectural norms have become mere relics of history, but this future mega developed city concept called the “Megatropolis” project may just be what a British city of the near future may look like. this architectural utopia came into being as a collaborative project between a few London-based artists and companies though the city that the project’s video depicts eventually ended up being NYC given how the production of the video was undertaken in the Big Apple. Even though the original “Megatropolis” project was trashed, the “City in the sky” concept that came into being as a spin off though it offers a rather naked vision of the future where underneath the apparently tranquil oasis lies a planet overladen with dirt, stress, noise and pollution. The obvious symbol used in the concept is that of the Lotus flower that rises above muddy water and offers a vision of serenity and peace amongst its murky surroundings.

The airborne living structure, however, do not provide its inhabitants with an escape from the murkiness that they live in; instead they simply allow them to rise above it into a world where the traditional values of the cohabitation of nature and humanity are preserved with daylight infused structures, panoramic glass windows and tranquil, lush green gardens.

Most creative and amazing doorbells

The most expensive designer handbags 2013

A Flashy And Sleek Design That Will...