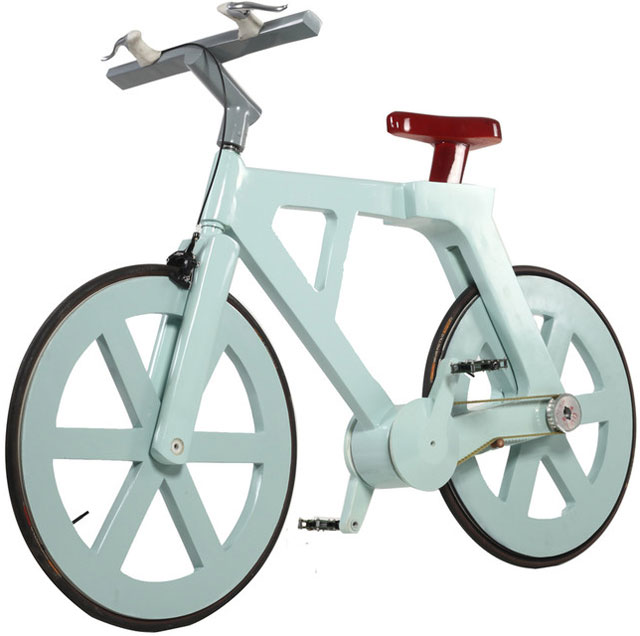 One of the most safe and pollution-free mode of transportation is the bicycle. However, poor people in most countries are still not in a position to own them, due to the increasing cost of materials. This has prompted many researchers and inventors to think of a cheaper alternative to save the planet Earth from pollution and to construct a new prototype of transport that is cheaper on the pocket and also pollution free. One such inventor is Izhar Gafni, who is said to be an expert in devising automated production lines on a massive scale. He is also an amateur enthusiast in cycling and is said to have planned for years the construction of a bi-cycle out of cardboard. He is confident of the fact that his invention of cardboard bicycle has the potentiality to change the transportation habits right from the poor African countries to the developing and the developed ones. Reaching out to the poor with the cardboard bicycle

Izhar is sure that his invention has gone through several tests and after much error and trial method, it is now ready to hit the roads and be produced on a mass scale. It took him around four long years to experiment and make a bicycle out of cardboard that is strong and fit for all types of roads. The main challenge that he faced was to design the cardboard in such a manner to construct a bicycle and after several tests and failures, he got it perfect. With the shape having formed, the cardboard was then treated with a concoction that was made with organic materials to make it fireproof and waterproof. In the last stage of construction, the cardboard bicycle was coated with a lacquer paint to give it a good appearance. For testing its durability, the Israeli inventor had the bicycle immersed for some months in a water tank.

This cardboard bicycle will not include any metal parts, including the brake mechanisms and the pedal and wheel bearings are constructed of recycled materials. Though the inventor owns various top range bicycles that are each priced at thousands of dollars, this unique bicycle is said to have a market price of just around $20, making it easy even for poor people to own one. This is because, the price of materials that are used in construction are said to cost just $9 a unit. He also assured that apart from the low price, it would be constructed on a larger scale in almost all the countries and he would engage the disabled, pensioners and the poor to supplement the workforce. He is also confident that this project is sure to garner grants from governments for manufacturers to construct on a larger scale. The ‘green’ materials that will be used for construction would weed out the production costs, thus allowing the governments to give it away for free to the poor in the underdeveloped and developing countries. As far as the financial rewards are concerned, it could be easily garnered through sponsorship and advertisements from the multinational companies. The bicycles are not only affordable, but also light and do not require repairing or adjusting. Their tires are constructed from reconstituted rubbers from the tires of old cars and hence would never have a puncture. The cardboard bicycle when constructed would weigh around 20 lbs (9 kg), unlike the average metal counterpart that weighs around 14 kg. Use Bacteria Eliminating Toothbrush and Keep Your Teeth in Good Condition

10 funky yet functional cufflinks for the...